If You Wouldn't Keep Running Them Out Of The Profession, Teachers Wouldn't Leave 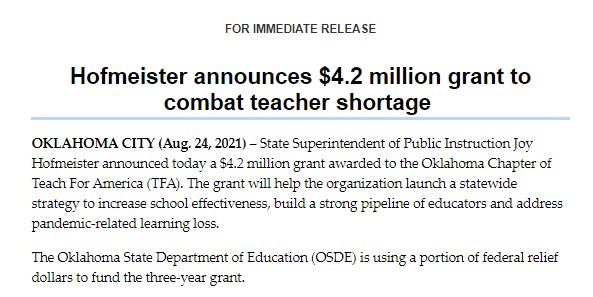 Last month, State Superintendent Hofmeister (who referred to the recent Governor-requested, first ever audit of the OSDE as "yet another attack on public education") happily announced she had gifted Teach For America over four million dollars to fill empty teaching positions. What she NEGLECTED to say however, was major.

No matter when our State Superintendent has publicly discussed teacher shortages, there has always been the clear idea that she believes this to be an issue connected only to pay. Clearly, the message here is to be "Oklahoma needs to pay their teachers more or they'll leave the profession".

I've researched this issue several times and posted two separate articles (here and here) concerning teacher pay during the 2018 teacher walkout (over pay). I can promise that, while pay is an issue for some, all the teachers I've personally interviewed over my ROPE career consider pay a very small part of the overall picture that is classroom meddling by FedEd and StateEd.

Here's a video we took during our fight against Common Core of a sweet teacher who literally retired because of Common Core.

Want something a bit more contemporary? Okay. Here's a video from 2019 that lists SEVEN reasons why teachers quit and pay isn't even one listed.

Don't like that one since it's from 2019? What about this one? This is a recent one from a woman who taught for 20 years before having enough. Look at the comments on the video. I'm not posting any more information in support of my claim because I DON'T HAVE TO. Trust me when I say, as an EX-GOVERNMENT-TEACHER myself, all of these things apply. I believe most GOOD teachers know how to teach and just need everyone but parents to get out of the way.

So, what do we need to do to RETAIN GOOD teachers? GET THE HECK OUT OF THEIR WAY AND LET THEM TEACH while protecting them from helicopter parents who just want their 'darlings' to be the center of every minute of every day and taking disruptive students OUT OF THEIR CLASSROOMS and not allowing them back until they can behave. Of course, there are a few more necessary things, but these are a GREAT START!

(Then of course you have the teachers leaving because their schools are forcing them to teach Critical Race Theory...)

TEACH FOR AMERICA GRADS SHOULD NOT BE STAFFING OKLAHOMA CLASSROOMS

I've done one blog on Teach for America teachers in our Oklahoma schools. Unfortunately, the teachers in the article released student data online complete with their id numbers. Why? Well, as explained by frequent education writer Peter Greene, TFA teachers are woefully untrained.

In addition, TFA is a contributor to "Teach Woke". Yes, a site that provides teacher training to:

...provide comprehensive race and equity training to help educators, schools, and institutions center and advance diversity, equity, and inclusion. Our workshops are research-based and have been created by educators for educators. Teach Woke workshops are personalized to fit our clients’ needs.

This is untenable in the state of Oklahoma where we've passed HB1775 - a bill preventing the teaching of tenets associated with Critical Race Theory, or Anti-Racist Training, or whatever words are used to label teaching that can create racial separation instead of racial unity.

Then, of course, you have all the TFA teachers who participated in the 2019 Teacher Walkouts in the state, proudly proclaiming that they would continue to strike if they don't get the money for the profession they feel they deserve:

As a new school year dawns, that spirit of activism continues nationwide: A recent poll found a majority of American teachers would vote to go on strike to advocate for elevated education funding and teacher pay--a stance supported by nearly three-quarters of the general public, according to the same poll. At Teach For America, we believe teacher pay and adequate resources for schools are critical to achieving excellence and equity in education for students and families.

It is clear that TFA does not espouse Oklahoma values, so why are we paying them to come into Oklahoma to train (not teach) our students?

Well, because it's easier to pay people to do a job - even if it's a bad job - than it is to set about fixing a profession (teaching) which is beyond broken and hurting not only teachers, but students as well.