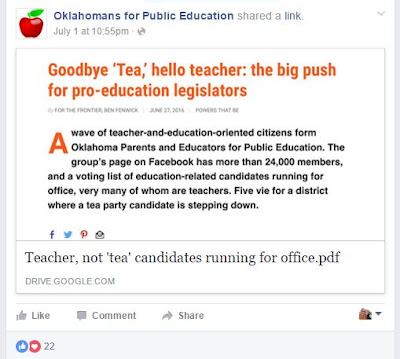 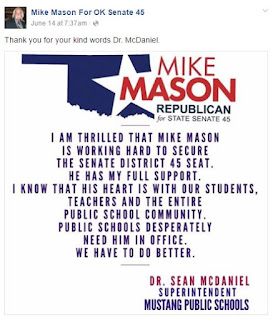 In February, I wrote a blog detailing how several school superintendents were using taxpayer funded email services to pressure teachers and parents into voting for the Step Up plan to increase taxes to fund teacher raises. I pointed out that regular taxpayers don’t have access to those thousands of parent and teacher emails to put in our two-cents about the measure, leaving sometimes drastically one-sided emails to thread their way throughout email accounts across the landscape of public education in a “get out the vote” campaign paid for by taxpayers to get more money from taxpayers. Doesn’t sound fair, does it?


During the 2016 election season, a group of teachers and administrators organized themselves into a group called Oklahomans for Public Education, dubbed “The Teacher Caucus”. They backed educators they wished to see elected with the sole purpose of increasing funding to public education.


The only problem was that many administrators actively backed education candidates on their school webpages or through their email systems. In addition they spent numerous posts trashing us, a pastor from Edmond running for Senate – and anyone else they deemed to “hate public education”. Teachers. And administrators. Paid by the taxpayer, publicly thrashing taxpayers who pay their salaries leaving the public to ask “Do we pay you to teach our children with those mouths?” 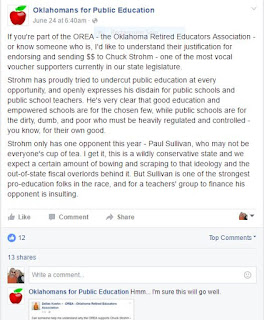 The Teacher Caucus took on seated Senators and Representatives that year with ugly rhetoric against school choice that got personal and mean. In fact, Senator Rob Standridge (R – Norman) – a school choice proponent - was targeted by the 2016 Teacher of the Year Shawn Sheehan and the race got so ugly, Standridge opined, “I know it’s been a rough year, but that doesn’t excuse the rhetoric. How do they speak to others? Are they teaching kids to bully?”


TEACHERS AND ADMINISTRATORS ILLEGALLY COLLUDE ON THE STATE SUPERINTENDENT RACE


For some reason, teachers are held up on a pedestal equal with the angels. There is no criticizing them or questioning the way they do their jobs. Many I’ve known (including my mother) ARE angels, but unfortunately, the devils among them tarnish their wings.

Our own State Superintendent of Public Instruction, Joy Hofmeister was indicted for colluding with other members of the public education goon squad monopoly to get herself elected. Here’s a paragraph from the blog I wrote about the indictment. 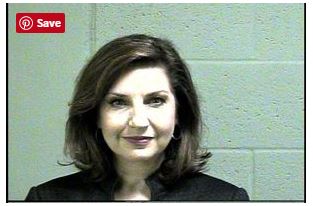 First and foremost, according to the Affidavit of charges, CCOSA (the Cooperative Council of Oklahoma School Administrators) and the OEA both gave Oklahomans for Public School Excellence (OSPE - the 'dark money' group which paid for attack ads against former state superintendent Janet Baressi) ONE HUNDRED THOUSAND ($100,000) dollars EACH.  Where does CCOSA get their money? From membership dues and workshops paid for by Oklahoma school administrators (Superintendents).  Where do school administrators get their money?  FROM STATE TAXPAYERS.  OEA also gave ONE HUNDRED THOUSAND ($100,000) dollars to this fund.  From where does OEA get their money?  FROM OKLAHOMA TEACHERS WHO ARE PAID BY TAX DOLLARS.

Again why are taxpayer sponsoring the pilfering of their own wallets by the people we are supposed to trust the most? That is a 7 BILLION dollar question I suppose, since the public education revenue for last year was $7,822,653,806.10. And they still don’t have enough money? How? How much is enough?


During the five years it took us to bring down Common Core, ROPE always had some form of pushback from the PTA, AFT/OEA, CCOSA and OSSBA – the major taxpayer funded lobbying organizations – but it was never as bad as when we began to review the NEW standards to be put in place by the OSDE. 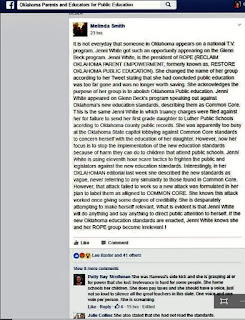 Though we were doing nothing but reviewing submitted reviews and posting them on our blog, the bullying, rhetoric and lies led by the state teachers and administrators was over the top.


One teacher, an elementary educator from Shawnee, took to Facebook to announce that my children were truant from school and that there had been truancy charges filed against me. My kids were pulled out to homeschool before we even moved to the Town in which we currently reside, so this scenario is not even possible, yet it didn’t stop the constant reposting and spreading of the lie over and over and over the internet via all the teachers and administrators who felt we ‘deserved’ that kind of treatment for not being “pro public education”.


In addition, Rick Cobb, Superintendent of Mid-Dale Schools, Tulsa history teacher Dallas Koehn, former teacher Claudia Swisher and Carl Albert vocal music teacher Mindy Dennison took to their blogs to castigate us in as many ways as possible – because we “hate” public education – and dared to review the new standards.


THESE PEOPLE WOULD GET A RAISE THE SAME AS SOME SWEET TEACHER WHO JUST WANTS TO LOVE ON HER STUDENTS, HELP THEIR PARENTS, AND TEACH. Why, WHY would we want to give  a blanket raise to cover THESE people? I don’t. No taxpayer should.


What should happen is that education should be funded and allowed to be run at the LOCAL level by the principals the school board hires to do the job and the superintendent the school board hires to administrate the school – including writing the budget. Teachers should be paid out of that budget according to the kind of job they do – not given a blanket raise by legislators in the middle of the state looking to score re-election brownie points with a huge block of ready-made voters.
Posted by Jenni L. White at 7:05 PM