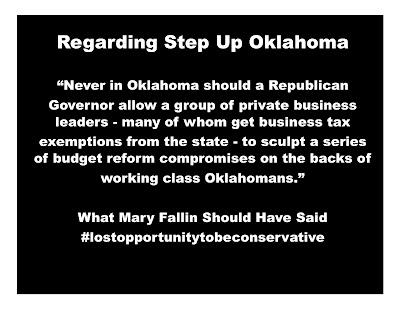 Recently I was provided an email written by Mid-Del Superintendent Rick Cobb, apparently sent to faculty at Mid-Del Schools. It read:

From: Rick Cobb
Sent: Wednesday, February 7, 2018 6:56 AM
Subject: Step Up Oklahoma
Dear Mid-Del family,
We’re hearing that on Monday, February 12th, the Oklahoma Legislature will vote on a plan that would possibly give teachers a $5,000 raise. For the record, I support this plan, but I have reservations about it as well. Funding for teacher raises alone will not include money to:
·       Restore cut positions and lower class sizes;
·       Raise support salaries;
·       Provide technology and textbooks with state funds.
If public schools were funded at 2008 levels, Mid-Del would have about $3.2 million more in operating funds right now. Imagine what that would allow us to do for our students! Again, the plan to fund teacher raises is real, but it does nothing to reverse the cuts we’ve made over the years.
The various education advocacy groups have asked us to send 75-100 people to the Capitol to lobby on Monday in support of this plan. Here are my thoughts:
1.       Mid-Del teachers would be the best possible representatives for our profession.
2.       Mid-Del teachers serve Mid-Del students better in the classroom than at the Capitol.
3.       The need and the plan are both crystal clear. We shouldn’t have to beg the Legislature to do the right thing at this point.
4.       Parents and community members can also represent us at the Capitol. If you have a strong parent organizations at your school, you can call on them
5.       Any employee feeling compelled to go to the Capitol to lobby is free to take a personal day, however. If you plan to go, please let us know by Thursday, so we will have a better chance of getting a sub.
I’m glad the Legislature feels a sudden urgency to increase teacher salaries. I will always support raises, and again, I hope this passes. I just want our overall funding concerns heard as well.
Thanks for all you do.
Rick
You can read more about Step Up Oklahoma at www.stepupoklahoma.com
Dr. Rick Cobb
Superintendent
Mid-Del Public Schools
405.737.4461
rcobb@mid-del.net
Follow us on Facebook and Twitter
____________________________________________________________

OKCPS ALSO GETS INTO THE ACT 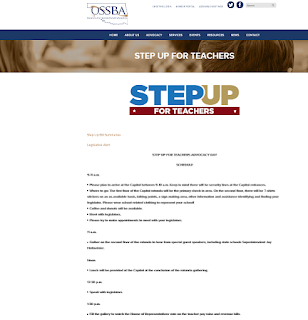 Another email from interim Oklahoma City Public Schools Superintendent Rebecca Kaye - along with Ed Allen of the Oklahoma American Federation for Teachers - was also sent my way. This email provided a link to the sign up page for the "Step Up For Teachers" event created by Oklahoma City Public Schools. It also contained the link for the OSSBA's "Step Up For Teachers" event that included a breakdown of the agenda for the day. 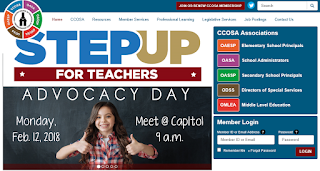 Of course, not to be outdone - and since they are another wheel in the "public education needs more taxpayer dollars" cog, CCOSA (Cooperative Council for Oklahoma School Administration) has a page to 'inform' public school employees about the "Step Up For Teachers" day.

OUR STATE SUPERINTENDENT LOVES STEP UP

The State Superintendent of Public Instruction, Joy Hoffmeister, publicly commented on the Step Up plan, saying:

"Oklahoma’s children, families and businesses cannot afford further erosion of public education in the form of a crippling teacher shortage."

As an elected official - voted for by taxpayers who then pay her salary, should she not be solving the "crippling teacher shortage", instead of lobbying for more tax dollars for her agency? Wouldn't it be up to a private advocacy organization to do that kind of thing - not the public official his/herself?

WHO CARES? SO WHAT?

Rule 2.4: "No person shall use or authorize the use of public funds, property or time to engage in activities designed to influence the results or an election for state office or a state question..."

While not exacting in language, both these rules could be argued "in spirit" in a civil court to also include legislation - especially when a Superintendent is using his/her position from which to send these messages to subordinate teachers. This is also a form of bullying and intimidation - especially to those who don't agree with the position of the email - but I thought schools were against that. I'm fairly certain a judge wouldn't go for that kind of thing - especially on the taxpayer dime.

2. Membership dues for CCOSA or AFT come out of the salary paid to the person via the taxpayer. In other words, AFT membership must be paid for by the teacher, who is paid by the taxpayer. Consequently, AFT is using taxpayer money to sponsor advocacy for more taxes. CCOSA dues come out of the salary of the school administrator  (or school funds) - paid by taxpayers - which is then used to lobby for more taxation.

Section 2: Teachers’ political activities shall in no way interfere with their obligations or assigned duties during their workday and shall not in any manner be injected into the educational programs of the District. 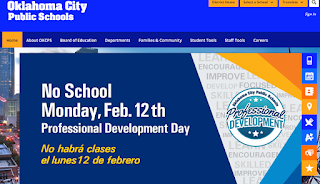 So, how can Ed Allen sign this email from OKCPS, let alone endorse the Step Up activism by teachers - who, coincidentally - are to be having a 'Professional Day' that day? Aren't teachers to be engaging in a "professional activity" that day? Don't they normally have to sign in and out of this activity in order to have those hours applied to the number of professional hours which are required according to their employment contract? Is lobbying for more tax dollars a legitimate "professional activity"? 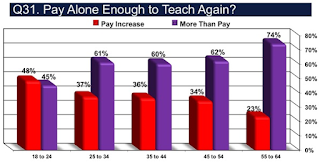 4. According to Mrs. Hoffmeister, teachers are leaving the state and teaching, in droves because of lack of pay. She stated this publicly in her comments. Interestingly, the poll she cites as the basis for these comments, doesn't say that. Only 31% of respondents (apparently those in the 18-24 age category) would return to teaching for a pay increase. Here is the way the question read:

"30. Overall, which statement comes closest to your belief: (Randomize)

31% If the pay would increase, I would like to teach again.

62% For me to go back to teaching, it would take more than just an increase in pay.

5. There is an argument to be made that Superintendents are ginning up the interest in the Step Up plan because it keeps THEM from having to save money back in their budgets to provide a pay raise for teachers. They can then lobby their (quite often) rubberstamping school board for more money in their own paycheck. In fact, the number of superintendents getting pay increases in the Tulsa Public School system currently is raising some eyebrows. Though superintendents in small districts often wear many hats, look at the salaries of superintendents like Rick Cobb (and this is from 2014 - what is it now?). Teachers don't come close to making that kind of money and they also often have to wear many hats, taking on extra duty assignments just to have a few more cents to take home.

6. Mr. Cobb - like CCOSA - actively lobbies for education issues. For years, he's written a blog in which he excoriates organizations he believes are not supportive of public education. He is a part of the very activist public education group that gathers under the hashtag #oklaed - which also includes the State Superintendent. An in-depth series on their attempts to undermine parents and taxpayers in the 2016 elections was done at Oklahoma Grassroots. Again, we pay Mr. Cobb a salary from our own pockets, which he then uses in various ways to undermine our beliefs, and preferences.

7. Organizations like OSSBA and CCOSA are not for parents - and isn't that what public education is about - schools partnering with parents to provide the best education possible for their children? Both these organizations pushed Common Core, standing with the Chamber of Commerce and other large private organizations that publicly excoriated anti-Common Core parent activists.

8. Teachers are rallying for more money, but how much more money are school budgets going to lose by doing what Mr. Cobb suggests,

"If you plan to go, please let us know by Thursday, so we will have a better chance of getting a sub."


PUSHING BACK IS A MUST


Unfortunately, though many of us have things we like to do more than contact our legislators, we're going to have to do just that. Contact your legislator this session. Let them know you're tired of public education employees using public funds to lobby against your interests as a taxpayer. After all, until we taxpayers have ready-made email lists paid for on someone else's dime that reach hundreds - even thousands - of Oklahomans through which we can advocate legislative action, it's hardly fair - or legal.