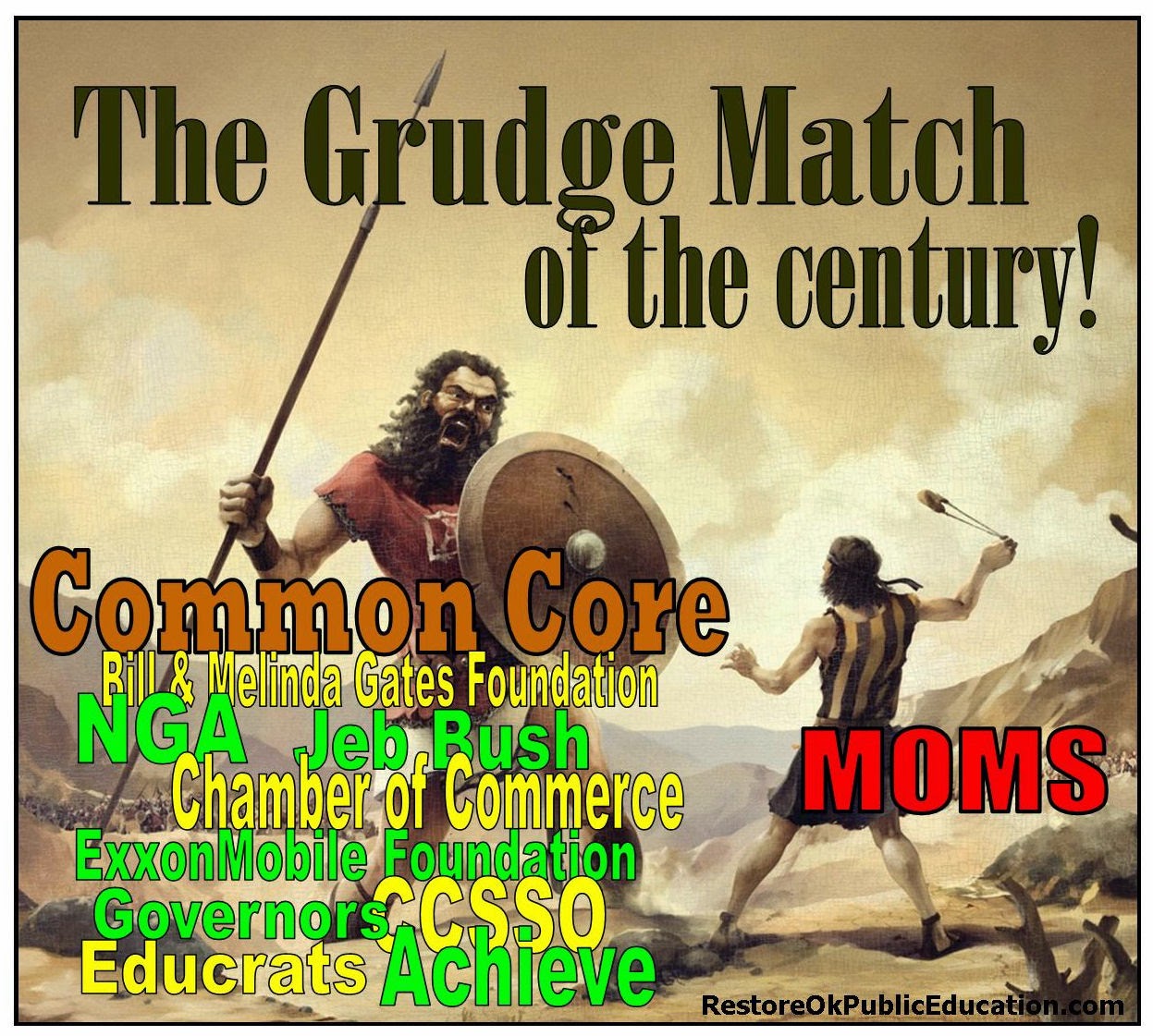 Anyone remember this meme?  This meme was our absolute, hands down, most viewed of all our memes.  I think we had something like 20K views, and hundreds of shares from our Facebook page - including a post on The Five's Fan Page when uploaded to social media last year.

Why?  Because this is a true story.  David DID defeat Goliath with nothing but a rock...and great FAITH that God would return his courage in action with blessing.  For those of us professing Christians, every victory should be understood in those terms, but most everyone enjoys stories in which the underdog wins!

It is a particularly sweet victory for all us moms and dads, however - underdogs without a tenth the monetary resources of the Oklahoma City and Tulsa Chambers of Commerce, the National Governor's Association (for which Governor Fallin is the current Chair), PTA and Stand For Children.

Many Conservatives have felt increasingly disenfranchised over the years - not only by party politics - but by our inability to move our government toward that of a smaller, less intrusive footprint more in line with the Constitution and our ideals.  For many years now, we have watched those in our own party (ROPE board members have been involved in the Republican party) who, at the federal and state level, propose and enact legislation that infringes upon our freedoms and impacts our ability to live our life in the "pursuit of happiness". I know many of us have felt as though we were David's confronted by a heavily financed and funded Goliath over which triumph seemed impossible.

As I wrote this week, citizens across Oklahoma (parents, educators, grandparents...) made thousands of phone calls and sent thousands of emails and letters to our Governor asking her to sign HB3399 which would repeal and replace Common Core in Oklahoma and we won.  True, grassroots efforts - individuals working together - effected a change few would have thought possible.

I believe the momentum may be shifting.  Yesterday, Eric Cantor, a leader in the House of Representatives since 2001, lost his job.  His opponent, Dave Brat, an economics professor at Randolph-Macon College beat the heavily financed Cantor (1.5 million in campaign funds) with 300,000 dollars by benefit of grassroots support.  The National Review Online characterized his message:

Monday, I had the distinct pleasure of interviewing with Sam Sorbo - Hollywood conservative, wife of actor Kevin Sorbo - who has taken over for Andrea Tantaros.  Toward the end of our interview she spoke about working with director Haing Ngor - a resident of Cambodia during the Khmer Rouge's reign of terror. She pointed out that, Cambodia, just as in other Communist countries, the start of communism began with elitism - elevating individuals with money and/or power in stature over others as a way to neuter the masses.

It's not hard to find examples of elitism in America today, sadly, and Common Core presents a very good example.  Bill and Melinda Gates, Arne Duncan, President Obama - all pushing the concept of Common Core (a nationalization of education ) using their money and positions as a basis - though none are willing to enroll their children in schools teaching Common Core (in the same way our federal legislators are not bound to participate in ObamaCare).  In other words, they believe the 'masses' should be placed under rules and regulations that needn't affect those "at the top".  If this isn't elitism, I truly see no other way to define the word.

The defeat of Cantor and the passage of HB3399 are powerful beacons of hope in our fight against elitism and the re-institution of Federalism in the US.  These recent actions should give Oklahomans and Americans hope the tide is turning, but it won't continue without effort.

To be part of the tsunami, you must get involved in the political process and stay involved.  You must be willing to do more than wring your hands and pray, you must write emails and letters, make phone calls, research political candidates and then support those of your choice with your time and effort.  Don't use a lack of money as an excuse to call in sick to the fight!  Together, we can make our government work for us as President Lincoln so eloquently stated, so "that government of the people, by the people, for the people, shall not perish from the earth".
Posted by Jenni L. White at 12:12 PM