What’s A Win Worth If We Learn Nothing From It? 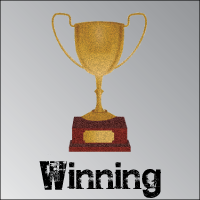 Thursday, June 5th, Governor Fallin signed HB3399 – the strongest anti-Common Core law in the nation currently – into law.  Oddly, though fighting the fight against Common Core since 2010, the win was a bit anti-climactic.  It might have been because there was no time for celebration – exhausted, I had two boys to get to two different baseball games that night after having been out of town at an anti-Common Core rally in Ohio for two days – but I also think it’s because I know the process isn’t finished.

The week before Governor Fallin signed the bill, CCOSA (Cooperative Council Oklahoma School Administration), OSSBA (Oklahoma State School Board Administration), PTA, Stand For Children, The Oklahoma State Chamber of Commerce, The Tulsa Chamber of Commerce and an organization called, “The Collaborative For Student Success” (funded in part by the VERY politically liberal New Venture Fund), released two full page ads full of scare tactics, in both the Tulsa World and the Daily Oklahoman.  After finding a rate card for both publications, it didn’t take long to decipher the group had spent over 30,000 dollars for these ads. 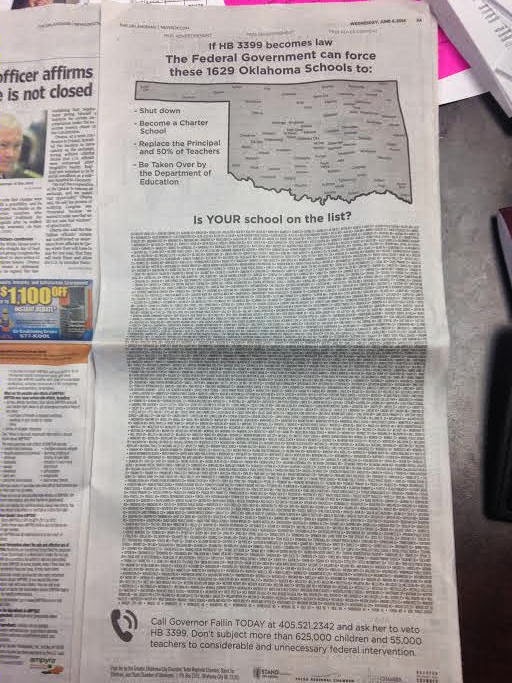 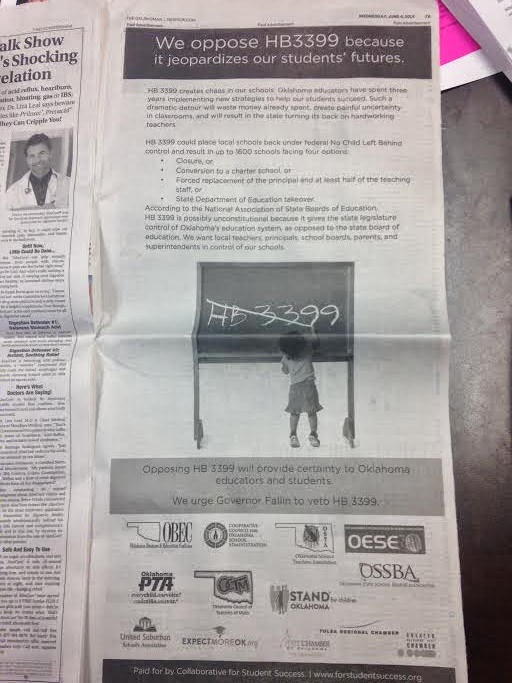 Over the years, I’ve written about the various organizations named here, such as the Oklahoma State Chamber of Commerce (here’s another good one!). I think many of us know the national Chamber of Commerce is not a friend to the Conservative.  With their lobbying for the healthcare law, immigration ‘reform’ (I put ALL reform’s in ‘air quotes’ because I see the word ‘reform’ as a euphemism for ‘more government necessary to give you something only we want’) and other anti-Constitution/big government ‘solutions’ in search of a problem.  In fact, most likely the only real trustworthy chamber is the Chamber in your individual town who cares more for the growth of the township than the State/National Chamber’s big government favoring big business agenda.

One wouldn't necessarily think that true of school administrators, but alas, they have turned against parents as well.  I wrote a blog recently where I enumerated the pro-Common Core organizations that ‘sponsor’ CCOSA.  Of course CCOSA wouldn’t support Common Core because they are financially backed to do so, right? (snark)

Interestingly enough, I have had numerous teachers report to me that their superintendents are saying they will follow Common Core no matter what.  One woman who posted on the Oklahoma Parents and Educators for Public Education Facebook page said, “The district’s stance was that if the state could change their mind, then the district could just do what they wanted.”  Sadly, it wasn’t “the state” it was THOUSANDS of parents and teachers that wanted the ruling reversed – it was thousands upon thousands of parents and teachers who wrote the Governor letters and made phone calls pleading with her to sign HB3399 and stop Common Core.

Apparently, as an OPEPE administrator told me moments ago, when a group of parents consulted this same school district for help on the third grade reading assessments, they were told that the district couldn’t break the RSA law.  I guess in administrator land, it’s all just whatever they want to do whenever they want to do it – parents be damned.  This would be simply fall on the ground hysterical if it weren’t for the fact that parents pay property taxes for those services and the administration are there to SERVE parents, not demand the parents serve them on their terms.

What about NASBE (National Association of State Boards of Education)?  Well, NASBE wants to sue the state over HB3399 saying it was against the Oklahoma Constitution to allow the legislature to sign off on the new standards rather than the state school board.  Can you imagine the veritable gall of these people?  Coming into another state and threatening a law suit over a state law proposed and enacted by the people of the state?  Seriously, solid silver guts here.

Why would NASBE act this way?  Simple, because they are Bill Gates shills like most of the rest of the pro Common Core factions.  This fight has always been the big money corporate elitists against parents.  Sad the OSSBA (Oklahoma State School Board Association) has had to get into the fray as well, signing on along with these other groups to keep Common Core.  This organization is made up of your local school board members.  You ELECT your local school board members to represent YOU.  Why would they counter parents?

Two separate school board members in the state have told me they never received a survey from OSSBA asking them if they wanted Common Core or not; the OSSBA leadership apparently decided that for themselves.  Well, as the OSSBA website says, “The OSSBA is a player on the national scene as a member of the powerful National School Boards Association”, and we all know where they get their money!  Oklahoma law stipulates that ALL Oklahoma school board members – though elected by the citizens of their district – must succumb to school board training.  Several school board members have told me this training ends up being accomplished through NASBE.  Recap: parents vote for school board members who then go to training with NASBE who then come back to the board with Bill Gates inspired ideas that move the school further and further away from parental control.


(NOTE 6/10: Shawn Hime of the OSSBA corrected me here.  NASBE isn't the NSBA - National School Boards Association.  OSSBA is affiliated with NSBA NOT NASBE.  NSBA has received money from Bill Gates, but not in any way to the extent of NASBE. That needs to be kept straight)

Then there’s the PTA. If you didn’t know, the PTA is really an offshoot of the National Education Association (NEA).  Consequently, though the name include the word “PARENT”, this organization left that idea behind in 1968 when leadership voted to support teachers in the event of a strike, leaving parents behind for their unholy league with the NEA.

Two other groups identified on the newspaper ad, are Expect More and Stand On – oops, I mean – For Children.

Stand, has a tainted reputation here in Oklahoma.  First we find they are bankrolled primarily by the Bill and Melinda Gates Foundation and therefore have no voice of their own, other than a parrot of Gates.  Second, we find they sent in a petition to our state’s legislature including 7000 signatures – just like a petition in Colorado – which was misrepresented to the press and contained  a large number of false names.

Expect More is simply a hodgepodge of organizations – mainly the Tulsa and Oklahoma City Chamber of Commerce’ - who have come together “in support of higher standards” for education. Not only have they spent large sums on advertising FOR the Common Core, they recently paid for a very slick video to be shot declaring the wonders of the standards.  So, again, this is a re-brand of Bill Gate’s money and that’s about it – period.

Here’s the takeaway.  We need to pay attention to the organizations and groups we support.  While parents may support them – they don’t support parents.  The fact that the OSSBA doesn’t support the parents that elect them to their positions should cause people to stand up in arms.

School board elections are in February.  Here is all the necessary information to run as a school board member.  Parents from across Oklahoma should plan NOW to sign up to run for school board against the NASBE-trained members currently working against them in their district.  The ONLY way you’ll take your school district back, is through the board – the board that in turn hires the ADMINISTRATION of the school!

If you don’t like the research I’ve provided you on these organizations, STOP SUPPORTING THEM.

Instead of PTA, have your school move to the Parent Teacher Organization (PTO).  PTO’s don’t take parent money and then lobby the legislature against parents.  PTO’s are individual associations within districts that have only an informational website for educational materials.

As Edmond dad, Matt Wilson, so eloquently opined on the ROPE Facebook page after the passage of HB3399, “…I know our work is not done and thank you for encouraging me to take a more active role in my children’s education and lives.”


Matt’s words mean more to me personally than I could possibly express.  No matter what we set out to accomplish with Common Core, Matt hit the heart of the matter – the one thing we truly wanted after all was said and done.  I hope EVERY parent can – and will – echo his sentiments and work to truly put themselves back in the driver’s seat of their child’s education in as many ways as humanly possible.
Posted by ROPE at 12:18 AM