Being a conservative is often a lonely position. Asking people to take responsibility for THEMSELVES to prevent government intervention is not an easy sell in a world where all the creature comforts of human existence are but a moment away. After being attacked personally by OCPAC for an opinion Reclaim Oklahoma Parent Empowerment corporately holds, a rebuttal is in order. It follows below.

In full disclosure, several members of ROPE met with OCPAC President Bob Linn February 8th to discuss our concerns with SB1647, during which time Mr. Linn admitted he had not read the bill.

Let's be very clear: NO, ROPE does not support the movement of tax dollars (government money - vouchers) to private or homeschools.

Here is the email sent by OCPAC on Valentine's day 2022, to which I respond using quotes from the email.

"The passage of SB1647 is a must and will give authority to the parent to direct their child's education."

This is incorrect. Oklahoma parents have more authority to direct their child's education than many other states. Parents in Oklahoma can:

The term 'fiduciary' comes from the word 'trust'. A 'fiduciary' responsibility imposes a restriction that money given (or taken) is used in good faith and in the best interest of the owner of the money. That's all that means.

The government has no money it doesn't forcibly take from citizens (people who don't pay their taxes go to jail or lose their property), so all 'government' dollars are tax dollars, taken from the people. Yes, government has a fiduciary responsibility for those funds, but how many times have those been overlooked and money spent wastefully and fraudulently? Who is NOT familiar with wasteful government spending? Tom Coburn was.

Bob uses Social Security as an example. This is a sad example of 'fiduciary' funds. Though I've paid into the SS system, it has been raided over and over by government overreach to the point that few of us my age will have funds to use for retirement. What happened to the government's 'fiduciary' responsibility there? Clue: GOVERNMENT DOESN'T CARE ABOUT 'FIDUCIARY' RESPONSIBILITY or public schools wouldn't be the problem they are now. If government cared, they would have appreciated their fiduciary responsibility and made schools responsible for not educating students all along.

TJ Schmidt, an attorney with Homeschool Legal Defense Association (HSLDA), does not agree with Bob's assessment and says that, because all money comes from taxpayers, any government money taken from citizens but then given back - as in to home or privately school children (voucher) - comes with the need to make those funds ACCOUNTABLE to taxpayers.

Here is a PERFECT example from Arizona, a state where government money is given to homeschooling families. CLUTCHING PEARLS...how could it be that a government audit found $700,000 abused by 'homeschooling' parents?

When citizens are 'incentivized' to use government money to do something they don't have the personal responsibility to do on their own, there will be fraud - it's simply human nature.

Arizona has the Empowerment Scholarship Accounts (much like SB1647) allowing state money to go to numerous types of schooling including private or homeschooling. Please note several things: 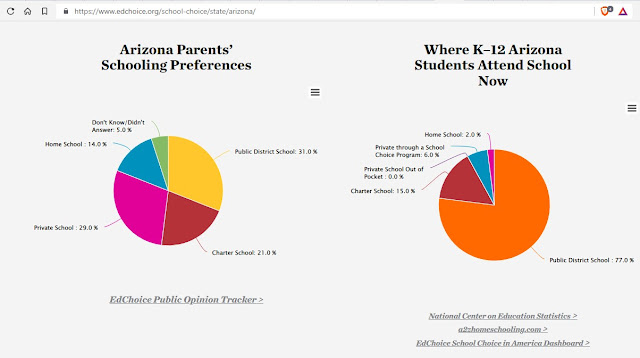 In fact, EdChoice tells us that 23% of Arizona's students are eligible for vouchers and tax credit programs and 100% of students are eligible for a tax credit scholarship, but ONLY 7% OF ALL ARIZONANS USE ALL PROGRAMS TOGETHER and that's the best record in the nation!
No data had been collected on the Lindsey Nicole Henry voucher for children with disabilities for 10 years, until last year, providing no previous accountability to taxpayers for the program.
Data for 2021 indicate that after a 31 million dollar investment over the 10 years, only 1,135 students took advantage of the program in 2021 and of those that reported their status (112), only 32% (36) were economically disadvantaged.
"We have denied an equal playing field" to children sentenced to a failing neighborhood school
How have we done that? I just cited 8 ways parents can direct the education of their children and showed that, when offered, most parents don't take advantage of voucher programs or tax credit scholarships.
But beyond that, since when did a 'conservative' talking point become 'equaling the playing field'?
I searched the term 'equaling the playing field' and found this slide show about how COMMON CORE equaled the playing field for all kids. Now that's great! But, as we said it would for YEARS, Common Core - making every child have the same curricula across the US - FAILED SPECTACULARLY, never amounting to any kind of positive change on student achievement of any kind.
CONSERVATIVES DO NOT USE GOVERNMENT TO 'EQUAL PLAYING FIELDS', we want the government to stay in its own lane and allow PRIVATE INDIVIDUALS AND THE MARKET TO CREATE CHOICE.
"Those who oppose educational choice where money follows the child display an arrogant and callous disposition to the less fortunate"
Gosh, I guess, people like Ben Carson, whose single mother worked three jobs to allow Ben and his brother a great education and Mark Robinson (Lt. Gov. of North Carolina) whose family was dirt poor but made sure he and his siblings were well educated have it all wrong. Government should have come in and incentivized their transformation - because government ALWAYS produces programs that work.
I find it sad that a Christian Conservative, would - essentially - call those who want LESS government and more personal responsibility 'arrogant and callous'.
In Matthew 26:11, Jesus tells us that the poor will always be with us.
Leviticus 23:22 quotes the Lord as saying, “When you harvest the crops of your land, do not harvest the grain along the edges of your fields, and do not pick up what the harvesters drop. Leave it for the poor and the foreigners living among you."
In other words, INDIVIDUALS, left part of the harvest for the poor to harvest themselves. The Romans taxed the Jews horribly, but their religion told them it was THEIR responsibility to help the poor.
As PragerU said in a recent Instagram post, "Jesus advises us to be of "generous spirit" - to show kindness, to assist the widow and the orphan. But he clearly means this to be our responsibility."
Conservatives are those who promote LESS GOVERNMENT, PERSONAL RESPONSIBILITY, PRIVATE COMPETITION and INDIVIDUAL GIVING.
"More than that, they also fail to understand that no parent should see their educational dollars forced into the government's failed model of education."
Nope, we get it - we just want it done THE RIGHT WAY - via tax credit and tax credit scholarship. Both would remove money from public education, but do so BEFORE the money is taken by the government in the first place.
Here's something Bob doesn't apparently understand - the legislature appropriates education dollars. Why don't we ALL advocate that, instead of giving more and more tax dollars to FAILING government education, the legislature use the grade card the State developed to get ESSA funds, to pull funding from failing schools?
Bob acts as though schools just fail by themselves. It's a cascade of failure from appropriations and over-regulation by the state and federal governments, through parents who have let school boards run amok by trusting they were doing the right thing and never checking up.
Bob complains that government schools are unGodly and parents shouldn't have to leave their children in that situation.
OF COURSE THEY ARE! THEY ARE PROPPED UP BY SECULAR GOVERNMENT MONEY! Do you honestly think that sending government money into home and private schools WON'T PRODUCE THE SAME RESULTS? It absolutely will. Right now, the only thing staving off an atheistic society are Christian home and private schools. Why do you want to compromise the two things that are working under complete parent control? That makes absolutely no sense!
In fact, schools that participate in the Lindsey Nicole Henry Scholarship - including private Christian schools - are required to comply with the antidiscrimination provisions of 42 U.S.C., Section 2000d, which the Biden Department of Justice has used to force schools into transgender bathroom policies and anti-discrimination policies protecting transgender athletes. I'll just leave that there.
Why not instead work with churches to create programs like microschools, learning pods or to provide daily tutoring, or even create a school specifically for those below the poverty line? The Biden Justice Department can't force policy there. Again, why does GOVERNMENT have all the answers? Don't conservatives think the private sector has those?
In closing, Bob calling me "a bit callous, heartless and cold" for wanting the private sector to do their job instead of allowing government to do that is a bit social justice warrior for me - especially in the face of Conservative principles. Government doesn't provide choices, the private market does and the more government 'does' the less churches and the private market do.
Note this: in 2021, homeschooling and private schools grew and Oklahoma public schooling LOST STUDENTS thanks to parents deciding to homeschool and leave government schools ON THEIR OWN POWER. 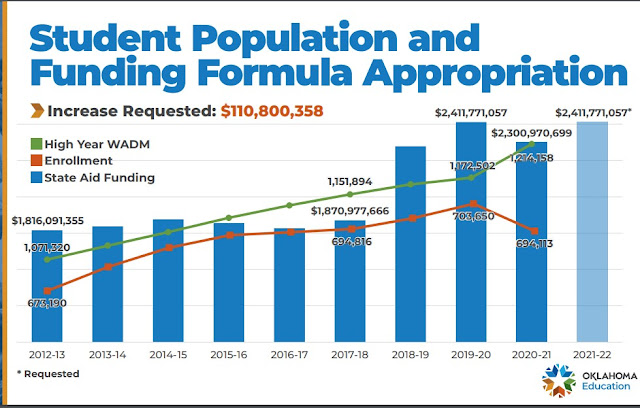 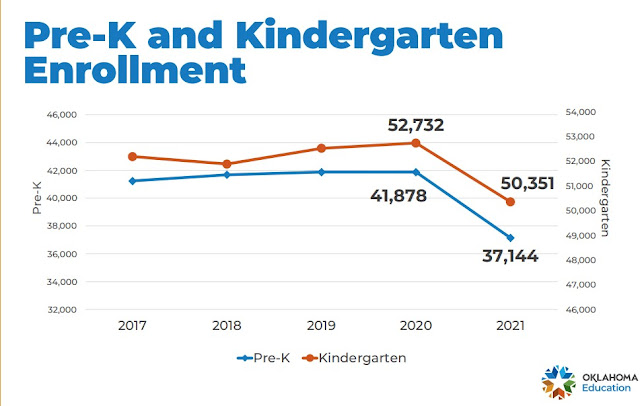 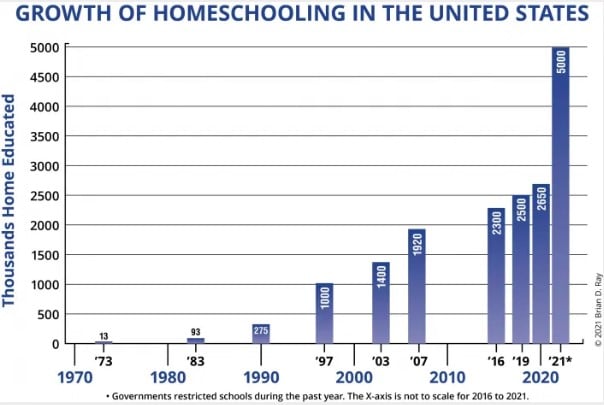 Just recently I posted a meme to our social media about how single-parent families could homeschool and was inundated with OTHER ideas as well:
These are AWESOME ideas that parents came up with all on their own without the 'benevolent' hand of the government 'helping' them.
CONSERVATIVES, STOP TRYING TO USE GOVERNMENT TO SOLVE THE PROBLEMS WE LET GOVERNMENT CREATE IN THE FIRST PLACE. The only ways to help students out right now (other than making the legislature responsible for their funding of failing schools) is to provide individual family tax credits for home and private schooling and tax credit scholarships for the same. This would help parents and 'punish' failing schools without government strings while allowing the free market to work.
Posted by Jenni L. White at 6:53 PM