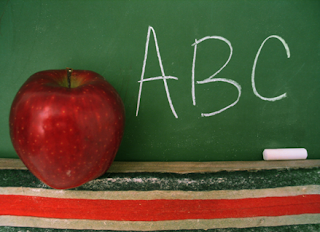 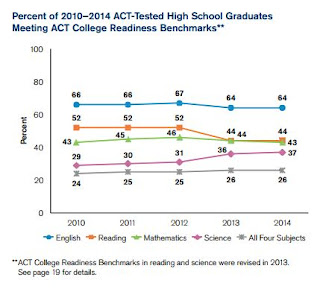 As many of our readers know, ROPE has not been supportive of state-sponsored ACT use. We believe ACT is a private-market test (no matter how the company would like to sell it) and parents and students should determine when to take it - even if they should take it at all.

Recently, State Superintendent Hofmeister made it possible for all Oklahoma 11th graders to take the ACT should they choose to do so (it is a voluntary action via school district). This was after the state legislature chose not to act on an end of year ACT exam last session.

This has left the question of "Why the ACT?" Why is it SO important to have Oklahoma students take the ACT? We're told it's because, as Mrs. Hofmeister has said numerous times, "Oklahoma is an ACT state", meaning (we infer) that the majority of students take the ACT and the majority of Colleges/Universities here in Oklahoma consider the results of the ACT for admissions. 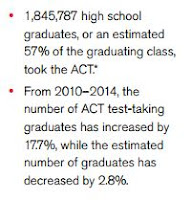 Unfortunately, it's rarely noted that both OU and OSU start with grade point average and class position as their first necessity for admissions - NOT the ACT. Both OU and OSU take SAT as well as ACT. So if that's not what makes us an "ACT state", what does? Is it the fact that the ACT is sold most often to parents/students here in Oklahoma? What difference is that other than the result of a good marketing strategy?

Recently, the National PTA placed an article on its website called "Ten "Must Know" Facts About Educational Testing". Here, the PTA covers common misconceptions and provides information on various different types of testing. Number 7 was interesting, so I have pasted it below. Please remember, as you read this, that the Oklahoma PTA has been one of the staunch supporters of the ACT.

Fact 7:Even though only about 25 percent of a student's success in college is related to the student's score on aptitude tests such as the ACT and SAT, parents should (1) still help their children prepare for those tests, but (2) avoid conveying a negative impression to a child whose test scores are not particularly high. The research evidence on this point is quite conclusive.
There are many factors far more influential than aptitude-test scores in predicting a student's college performance. A student's motivation, study habits, and interpersonal skills play powerful roles in shaping collegiate success. Parents should not think that a child who doesn't earn super scores on a college admissions test is destined for failure—in college or beyond. Numerous students who earn lofty scores on the SAT or ACT take an academic tumble when they get into college. There are many important kinds of intelligence, and the "academic" intelligence measured by most standardized aptitude tests is only one.
Action Implication:
First, if your child doesn't score well on the ACT or SAT, do not conclude that your child is "not bright." And definitely do not convey any such negative impression to your child. Second, because ACT and SAT scores do, in fact, play a significant part in current college admissions decisions, be sure to provide your child with at least some preparation for those tests

Goodness. The national PTA essentially says here that really, the kids who do best on the ACT are the ones that have test prep. Hmmmm. Now that we're providing all 11th graders with the ACT, the state will most certainly need to hire another private non-profit like Kaplan Test Prep or the scores won't be as good as they could be. Not only that, but even if the students don't do well on the test, poor results don't really mean anything in the context of a student's preparation for the world. Even retiring ACT president, John Erikson says,


"...but even if you think your test results don't reflect your grades and courses, your classroom achievements and dedication will overcome a poor test showing."

So why do we need to pay kids to take this test again?

Could it be then, that the reason why ACT is so heavily lobbying for Oklahoma to make ACT a 'state' test - and why the education establishment is kowtowing to this sales job - is because of the fact that everyone involved here will get a big fat chunk of data from every kid who takes the test? Yes, I think so. Data is power. As Arne Duncan so famously said, "Data drives decisions", and of course, the Oklahoma education establishment bought this idea hook, line and sinker. Yes, if we make ACT a 'state' test, the state will get a big fat package of student data and so will ACT.

ACT has its own entire division for data collection. Test takers have a supplemental data form they can fill out at the beginning of the test. ACT analyses this information in order to assist student placement in the best choices for them following graduation (college, trade school, etc.). They also have an entire division devoted to collecting data based upon test responses which then allows them to make 'predictions' about the body of test takers and their preparedness in each of the tested subjects. They also use this data to 'verify' assumptions about the validity of the test.

What in the world could state and federal governments do with these data but go on to create yet more - expensive and invasive - changes to the public education system, including more testing? In other words, education policy arises from data collected from tests that are then used to define education policy! It's a self-inflicted wound - a closed loop system.

Just recently, ACT released the data collected from students who took the ACT last year in their annual report. Though the Common Core panacea was supposed to have been instituted in states in 2010, the headline of the entire multi-page annual report would have to be,


"...based on data from a record 1.9 million ACT-tested students - nearly 60% of the 2015 US graduating class - shows very little change in overall college readiness over the past several years."

Interestingly, the SAT has very similar results to report,


Apparently, all the new federally subsidized and 'suggested' education fads aren't working. What else could these results underscore other than the COMPLETE AND TOTAL FAILURE OF TODAY'S EDUCATION REFORM POLICIES? Apparently, the constant testing pummeling students today in the name of education accountability isn't helping anyone but the bottom line of the testing companies. It's SURELY and OBVIOUSLY not helping the kids. If parents want students to take college readiness tests, parents should either pay for them out of their own pockets, or apply to ACT for a grant to do so. States should not be using hard-earned tax dollars to pay for a test that - at best gives them an idea of what they do and don't know - they should be using those tax dollars to support great teachers and TRADITIONAL educational methods that have been shown to work for decades.
Posted by ROPE at 9:44 AM No comments: