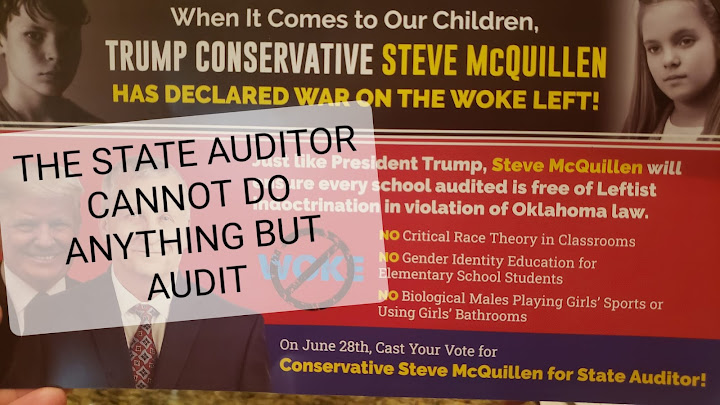 Suddenly, dishonest and disingenuous mailers are being sent out state-wide against current state auditor Cindy Byrd.  According to Nolan Clay of The Oklahoman, candidate McQuillen has filed bankruptcy twice and is not a licensed accountant - unlike Byrd.

A recent article in the Tulsa World by Randy Krehbiel did a wonderful job of summarizing the dark money being poured into the race against Cindy Byrd.
According to Krehbiel:

An Ethics Commission filing shows that Truth PAC, based in Oklahoma City, bought $280,596.60 in television time for McQuillen earlier this week. It has reserved more than $680,000 in air time, but it is not clear whether all of that is for the auditor and inspector campaign.
Records show that Truth PAC was created June 9 with Matthew Parker as chairman and treasurer. Parker is a business partner of Fount Holland.
The filings do not show the source of the $280,000.
The mailers carry the stamp of Holland and Parker’s company, CAMP, and the name “American Values First” and a Tulsa address that is a box at an office supply store.

Who else is CAMP working for?  Chances are many of the mailers you're getting in your mailbox have their sticker on it.  Just today I received CAMP mailers: 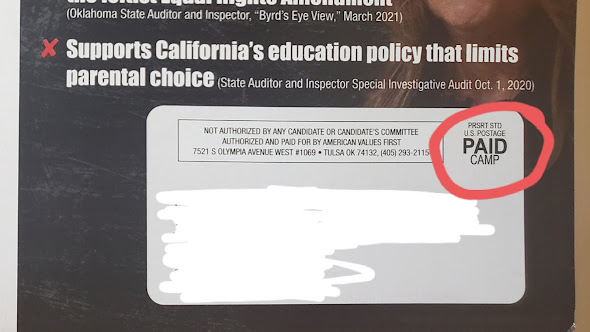 If you look under the Postage Paid stamp, you'll see CAMP - Fount Holland's organization.
Why does it matter that CAMP would be involved in any race?  After all, they are an organization paid to do a job - promote candidates.  They're simply doing their jobs.
In 2016, Fount Holland, Joy Hofmeister and others had charges filed against them for violating state campaign laws - conspiring to use dark money in attack ads against then-state superintendent Janet Barresi.
Dark money should concern every voter.  Money being poured into races to influence voters - many of whom do not do their own due diligence by researching the candidates - puts those of us who do our civic duty and due diligence at a disadvantage by influencing voters we can't reach.
This is ESPECIALLY TRUE IN THE STATE AUITOR'S RACE.
In the article by Nolan Clay of the Oklahoman - a STARTLING revelation comes to light:

When Steve McQuillin last filed for bankruptcy, his attorney told the judge he was retired, had severe health problems and did not intend to return to working.

...He said his two bankruptcies - in 2002 and 2020 - should not be held against him.  He blamed the first one on a marriage that didn't work and the second on medical expenses after being hospitalized in Texas for a kidney stone.

WHAT?  The Oklahoma State Auditor and Inspector (OSAI):

...as the chief auditor for the State, is responsible for auditing the financial accounts of all government agencies within Oklahoma. The State Auditor and Inspector also performs performance audits and special investigative audits upon request by certain state officials and upon petition by citizens.

And we're supposed to believe that a person who has two bankruptcies in his credit history and isn't even a licensed accountant is someone we should trust to oversee the OSAI office?
Cindy Byrd won the National Association of State Auditors Comptrollers and Treasurers (NSAA) Award for Excellence for her forensic report on EPIC Charter Schools. 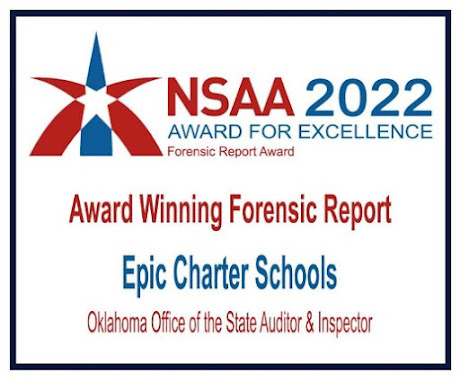 Clearly, Auditor Byrd is not only doing the job she's paid to do - protect Oklahoma's tax dollars - but excelling in that job.
Don't be fooled by disingenuous (the SAI cannot stop flow of immigrants across the border or stop CRT in schools as many of the mailers - no matter how much "war" McQuillin has declared "on the woke left") and inaccurate mailers paid for by people who don't want you to know their identities.
Auditor Byrd is completing an HISTORIC audit of the Oklahoma State Department of Education.  An audit which ROPE has asked to be accomplished for over a decade.  Byrd needs to be able to finish that job and ROPE is very much looking forward to the results of her audit.
Based upon the successes of her previous four years, Auditor Byrd should definitely be supported for another four and these dark money groups pushing someone clearly not an appropriate fit for the SAI job, should be outed for trying to do just that.
Posted by Jenni L. White at 7:02 PM