Sports VS Education - Do We Really Care About Education As Much As We Do Sports? 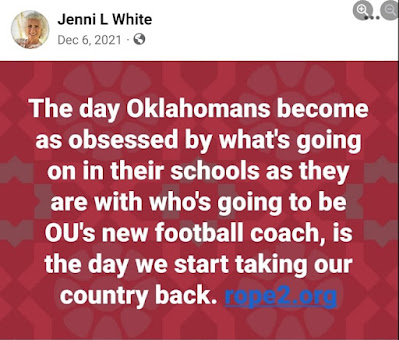 Not long ago, I off-handedly created a meme that went viral. It basically said that if Oklahomans worried more about the education of our children than who was going to be OU's next head coach, we'd start taking our country back.

I don't hate sports: I coached middle school girls softball for 3 years, the second oldest daughter was in a traveling basketball league several years, the next youngest girl played softball nearly all her time in elementary school and the two boys played a bit of baseball.
Here's the problem: a focus on sports that eats into, or usurps academics, and that problem is enormous.
As a teacher I saw it often. In middle school I had a parent who literally told me she didn't care about her child's grades because he was going to play basketball and wouldn't need an education.
An extension of this thought process comes to light when you talk to college professors. Many will tell you that, often, sports 'stars' will send surrogates to class for them so they don't have to attend or do the work themselves. It's all done with a wink and a nod and accepted as 'the way it is' because, well, sports and all the money athletics brings into the school. DON'T FORGET: money and power are the drivers of nearly every rotten thing.
As a high-school science teacher, I had a basketball star in my Ecology class one year. He did nothing but fall asleep in the back row. Consequently, he received the 'F' he deserved, making him ineligible for play that week. After the ineligible list was published, the mother called the principal and the principal called me into the office. I was to meet the mother before class - at 7am - each Wednesday morning to discuss what her son needed to do to stay on the eligible list for that week.
Three weeks of meetings and the student still wasn't putting in enough effort to get above a 'D'. During the last meeting, the mother told me that the reason the son wasn't making the eligible list was because I was a racist (and this was in the early 90's!) and she would have him moved to another class.
Of course the principal moved the boy to a class where he - and the rest of the team - could stay eligible. I never received an apology from the mother's actions, nor was the child ever made to perform at grade level. Problem solved.

This example, frankly typified much of my teaching career in public schools, unfortunately - parents threw a fit, student got what they wanted and teacher was the one punished in the end.

Sports can teach valuable lessons, this is true, but not when sports become the idol of the school or the family and, sadly, this case is more often than not, while academics becomes relegated to last place.
Taxpayers don't own their own property, in part, thanks to the MASSIVE school bond issues passed to create multi-million dollar sports facilities for high schools. School budgets strain disproportionately toward sports (in many schools) and administration, when those dollars could better used for tutors, more challenging curricula and teachers with Master's degrees in subject areas - not courses on how to teach.
Yet, in a blind grope to increase academic output, the state and federal governments continually usurp power over parents and the community by creating law after law to the point that the hands of all those concerned become tied, making it impossible to create changes for the betterment of students even if they wanted to.
Look at Title 70 - the section of law referring to public education in Oklahoma - it is enormous and convoluted, to my point.

Truly, there are but two ways to 'save' public education: for governments to stop trying to control the practice - and for better or worse - hand it back to the communities to which it makes the most difference, and for parents to assume full responsibility for their own children.

But yet, human nature will never allow that to happen... governments necessarily want to control, human nature allows parents to let them and the cycle continues unabated.
Until we understand that PERSONAL RESPONSIBILITY is the key to freedom and happiness and that this character trait - though it flies in the face of our lazy natures - is our ULTIMATE CONTROL over every aspect of our lives, human beings will forever be doomed to control by those who crave control and our system of public schools will never produce the results we expect.
Posted by Jenni L. White at 4:54 PM