What Are Parents To Do To Stop Schools From Violating Student's Rights According to Anti-Critical Race Theory Bill HB1775? 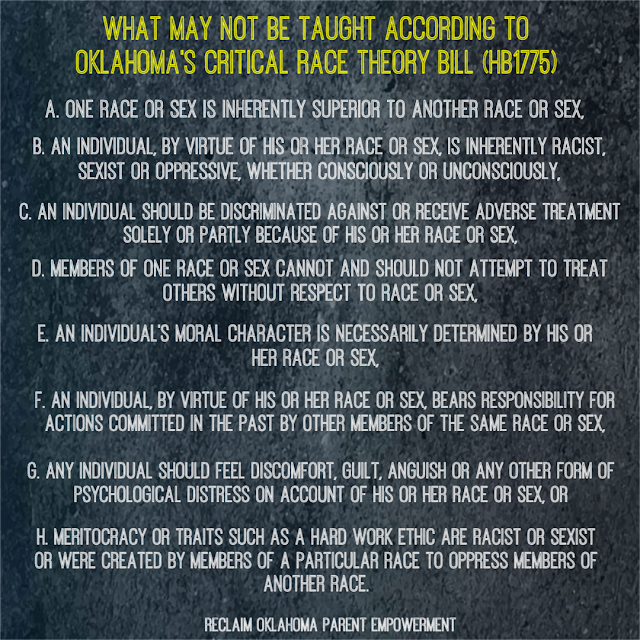 Truly, what have we come to when Oklahoma educators are angry because a bill including the above prohibitions was passed during the 2021 Legislative Session?

Yet Oklahoma educators ARE angry about this bill.

1.  Oklahoma City's Public Schools Board voted unanimously to denounce the bill after it was signed into law, calling it 'racist', 'cowardly' and disgusting.

Why?  What about any of this bill's language is racist, cowardly or disgusting?

Should children be made to feel guilty for their race?  Should a person be discriminated against because of their race?  Didn't we undergo an entire Civil Rights movement dedicated to stopping that kind of activity?  Why then, is it racist, cowardly or disgusting to pass a bill prohibiting the use of discriminatory language and practices against students in Oklahoma classrooms?

If one takes a bit of time to scour the internet, one will find example after example of school work assigned by teachers that absolutely violate these tenets.  Yet, you'll also find teachers angry that they're not able to teach Critical Race tenets.

Please note #2 (teaching that "America is systemically racist"), #5 (teaching that white children should apologize to black children and be ashamed for what their white ancestors have done to black people) and #6 (teachers and faculty treating white students and faculty as racist) are ALL covered in HB1775.  So educators in Oklahoma who object to HB1775 apparently don't understand or haven't read their "Commitment" to their students.

Now note Principle 3.  A teacher may be FIRED for "mental or physical abuse to a child", or "instructional ineffectiveness".  There is certainly an argument to be made that dividing children by race and telling them they should be ashamed of their privilege is abusive.  In addition, teaching children ANYTHING about race - considering the fact that most schools in the nation (including Oklahoma) are producing a majority of students who fail to be even PROFICIENT at reading and math according to the National Assessment of Educational Progress, could most certainly be considered "instructional ineffectiveness".

The Oklahoma State Department of Public Education (OSDE) has spent extraordinary focus on the concept of "bullying" in the last decade.  In fact, they have an entire webpage dedicated to the topic.

Here is the definition of "bullying" found at the link above.  Included in the definition is: "insult or demean any student or group of students in such a way as to disrupt or interfere with the school's education mission or the education of any student".  Who in their right mind would say that any of the topics described by HB1775 - which have been brought to the attention of school boards all across Oklahoma and the nation - would NOT be demeaning or insulting to children of any ethnicity?

SUGGESTION:  If your child is being taught any of the divisive concepts identified in HB1775 - use THIS FORM (created by the OSDE) - to FILE A COMPLAINT with your school through the chain of command.  This is important because if anyone in the process is reasonable, the issue will be rectified - if NOT, notes detailing efforts to solve the issue through the chain of command are important in the event a lawsuit must be filed against the district.  Parents have filed lawsuits against divisive and discriminatory teaching and a lawsuit should be filed if no satisfaction is forthcoming - after all, education through public schools is statutorily guaranteed and tax dollars are used for their upkeep and administration.

FIRE (Foundation for Individual Rights in Education), Judicial Watch and Institute for Justice may be able to be of assistance in that capacity. 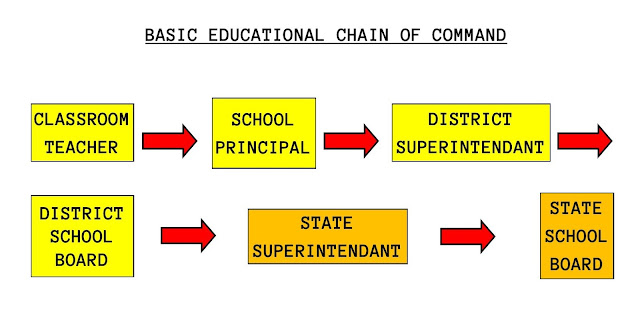 According to author and former political science professor Carol Swain (and others), teaching the tenets described in HB1775 is unconstitutional because they violate the Civil Rights act of 1964 and the 14th Amendment.

Unfortunately, though parents are able to file a Discrimination Complaint with the Office of Civil Rights at the United States Department of Education against schools which violate students' civil rights, the Biden Administration has made it abundantly clear on whose side it would fall in that case.

Not long after President Biden assumed office, he began to telegraph the idea that he would provide grants - not unlike those of his Democratic predecessor's, Race to The Top program - for Critical Race Theory training.  Consequently, the idea that a complaint through the Office of Civil Rights would do much to stop anti-constitutional discriminatory teaching is nearly nil.

WHAT ARE PARENTS TO DO TO STOP SCHOOLS VIOLATING HB1775?

Unfortunately, HB1775 is more of a statement against CRT tenets than a prohibition of such.  Though the bill clearly and definitively outlines concepts which should not be taught in public classrooms, there is absolutely no "if/then" terminology - meaning, there is nothing in the law to STOP teachers/schools from using CRT tenets - much like what happened with the bill to 'STOP' Common Core.

Consequently, parents will be the only mechanisms by which CRT can be stopped in classrooms during the upcoming school year.

So what to do?  We suggest:

1.  Talk to the teacher responsible.

2.  If the teacher is unresponsive/unwilling to stop, fill out a bullying form for the teacher.

3.  Make an appointment with the Principal and take the form directly to them.

4.  If the Principal is unresponsive, follow the Chain of Command until the situation is resolved.

5.  If the situation is NOT resolved, work with other parents whose children have been experiencing the same issues.  Often resolution comes through pressure on a school board through significant numbers of educated and angry parents.

6.  If resolution is still lacking, work with other parents to contact one of the groups above committed to assisting parents with Civil Rights violations and be prepared to file a discrimination lawsuit against the school.

Frankly, it's sad that our society has come to the point where the education of our youth is more 'indoctrination' than learning, but parents should be neither accepting nor disengaged regarding the concepts to which their children are being exposed in the classroom.  There is no reason not to act.  All the information necessary to do so is contained in this blog.  DO NOT FORGET: the education of children is a primary responsibility of every parent - and every child is entitled to an appropriate public education via Oklahoma law.