We Don't Need Your Corporatist Or Progressive Education - The MIDDLE'S Here To Play! 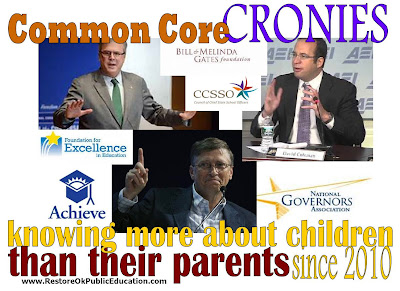 Joy Pullmann at the Federalist wrote a GREAT piece today on why Michelle Rhee should NOT be named as theSecretary of Education. I loved it so much, I'm doubling down on it.

No, neither Rhee nor anyone else of her 'ilk' should be appointed as head of DOE.

In case you don't know - or are somehow new to education policy (or heck - just governance in the United States) - there is no middle ground. NONE. Yes, there is supposed to be a gradient of governance that tends to rest somewhere near the middle of the ideological spectrum (ideally) in EVERY area over our lives the government has usurped, yet - particularly in education - what you really have is this:


LEFT
On the left side of the scale, you have teacher activists backed by their unions following closely behind private administrator organizations that serve as unions without the unPC name. These people detest anyone who likes the idea of parents making decisions about where their kids should go to school - especially, if they're going to take back their tax dollars to do it because, as we all know, public schools are doing one hell of a job educating the masses with it, what would they do without it? They like to find ways to hire people to become lobbyists and then figure out ways to get people elected by skirting campaign laws and donate funds to dark money groups for ads heavy on the rhetoric and light on the truth.


They know - because they taught them - that the masses have only been really well-educated in the ability to see everything in the world through an emotional lens, so if they can pull on your heartstrings by showing you a picture of precious Suzy who is not learning because the BIG BAD LEGISLATURE and CONSERVATIVES who hate public education aren't providing pay raises for her teachers, they know you'll cry and INSIST on a pay raise for Suzy's teachers, which in the end gets funneled through administrators and rubber stamping school boards to the 70 million dollar football stadium (or cafeteria, or fill in the blank) or their Superintendent's campaign, or whatever district project will make the Superintendent look good so he can keep his yearly sixfigure salary.

But oh, isn't little Suzy PRECIOUS? And aren't these legislators mean or these voters racist or homophobic for leaving public education to languish so for funding?

RIGHT
On the other side of the spectrum you have the Corporatists or Elitists - however you want to throw down the terminology. These people want workers and they want taxpayers to foot the bill for their training - kinda like they do when they go, hat in hand to their state legislators asking tor special tax exemptions because they're bringing the state so many jobs and how can we forget that people with productive jobs create taxes which make up (sure they do) for the taxes they're not paying thanks to their tax credits and exemptions.


They think parents are stupid when they voice their opinions about how their children should be educated, and that stuff like Common Core is awesome. They have a LOT of money to throw around to pay for full page ads in newspapers and magazines and television ads on ESPN during your golf tournament to sell you on the idea that public education is essentially failing because kids can't get jobs and shouldn't we be training them to work while they're in school?

They donate lots of money to private corporations to do stuff like develop software designed totrack every student until past the time their social security kicks in so someone somewhere can make sure that they didn't get prostate cancer because of a computer program they used for Grammar in the 3rd grade.

MIDDLE
In the middle, you have parents whose children are actively being worked as pawns against either side because neither side really cares about kids - they care about money and power and the means to the ends that achieve that for themselves. Parents want to send their kid to a school every day that is safe (which they can't because the federal Civil Rights office has made sure that at least a large segment of the population CAN'T be removed from class for misbehavior of ANY type), filled with teachers who not only know their name, but like being there, (yet they can't because most public school teachers today are becoming swayback from the large numbers of paper they have to push everyday to keep track of all their kids so they can be kept on track tograduate from high school, express and understand their emotions so they can learn and think about 2+2 well enough to understand why the answer is 4) who they can count on to educate their kids. Unfortunately, most parents KNOW the system isn't working for them or their kids. Many want to pull their kids out and homeschool them (a phenomenon which has seen astronomical growth just inthe last four years alone in places like North Carolina and across the nation), but they have to work two jobs or have sick parents or don't know where to begin.


Public Education in the United States was not failing until we parents allowed it to fail. Now, with the election of Donald Trump - apparently the only candidate we believed would actually hear those of us in the middle - we're ready to takeback our God-given vocation as the head master of our own child's education.