Parental Rights VS The Collective - Or Tyranny VS Freedom 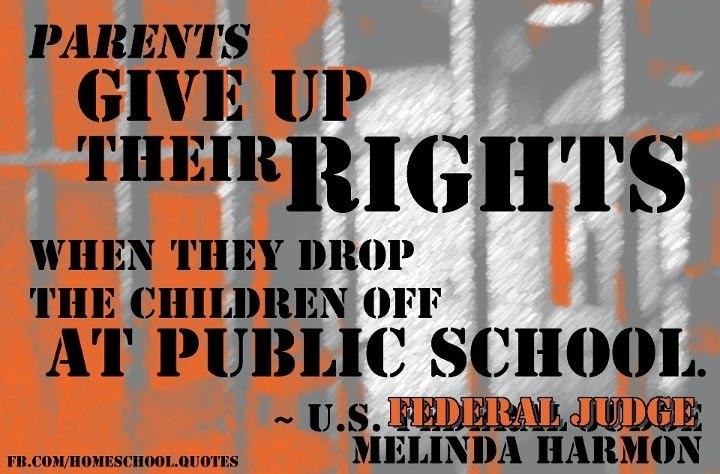 How do you feel, as a parent - or even a grandparent - about this statement?  It was actually uttered by U.S. Federal Judge Melinda Harmon


"In a court ruling concerning parents who sued a school district when their son was forced, by a female Texas Children's Protective Services worker, to strip naked and answer questions designed to determine if the boy's parents had paddled him."

Just recently, America's own Attorney General, Eric Holder, has said parents have no fundamental right to school their children at home.

This week I read a paper provided me by ROPE Board Member Jo Joyce.  Jo is Catholic and has been fighting the IAF (Industrial Areas Foundation) and their movement in the Catholic church, for years.  The paper she gave me, "Change Agents, Alinskyian Organizing Among Religious Bodies" was written by a woman who has become a friend (Stephanie Block) as they have both fought the issue.  Everyone needs to read at least the portion of Stephanie's paper that covers education.

I have been working in grassroots politics for only about 5 years now and have had time to think out my ideas on public education.  This paper made connections for me that I had not yet formed - it was that amazing.

For example; ROPE has had a problem with the word "stakeholder" for ever.  All you have to do is search our blog for numerous posts on the issue.  It wasn't until I read Stephanie's paper that I put this together.  Here is a quote,


Stakeholders, some of whom are parents, who attend an IAF Strategic Planning Meeting are asked, “What is the role of parents and the community in that mission [of the school]?”

Without much effort, a seemingly innocuous philosophical foundation has been created, one on which the IAF’s Alliance schools – models of education reform – depend. The parents have accepted themselves in the “role” of one “stakeholder” or “collaborator” among many in their child’s education.

What happened to the rights of parents?  What happened to the concept that PARENTS were those people who had charge of their own children - adopted or birthed?  If you're a Christian, you believe your children to be a gift from God and you believe your Biblical charge to "Train a child up in the way he should go and when he is old he will not depart from it" (Proverbs 22:6).  There is no Biblical mention of losing your parental rights the moment you drop your child off at school, however, this is quickly becoming the way of the world.

I posted several comments about this on our Facebook page the other day.  I thought it important to share these.

Jenni:  I just read the most interesting paper describing the shift away from the rights and responsibilities of the parent to educate their children to the responsibilities of the COLLECTIVE (what are 'stakeholders' anyway?) in conjunction with education 'reform'. When we hear people in 'authority' positions describe the ways in which 'stakeholders' should determine the course of public education, we MUST begin to ask those people - publicly if possible, "Since when did it become the job of the COLLECTIVE to determine how my child is educated?" The course of public education is STILL - and always should be - charted by individual parents through their ELECTED school board representative at the local level where it can best reflect the needs of parents and the local community. I will post the paper under this post later this morning so everyone can read. It is truly enlightening the way Community Organizing has turned public education into an engine for social change!

Niky:  I still always come back to all those kids whose parents can't or won't be that guiding force. What do they get? Our children are blessed with good homes. In Oklahoma, the poverty rates of children are climbing. Whose taking care of them and helping make sure they break the cycle? What parental figure do we get to blame when they don't?

Jenni:  Niky, I understand, I really do - and I know you have the very best desire to care for all children - the only problem is that the line between individualism and the collective is a thin one and the idea you are espousing - while worthy - is on the slippery slope toward the latter. I wrote a blog once about the Straw Man argument that education reform has become. At once many say parents are not doing enough for their children, while at the same time making certain the system favors anyone but the parent. How else do you explain State School Board meetings that will go on endlessly - where APPOINTED officials intone their desire to mold education to be a system for everyone - yet parents are allowed THREE MINUTES to make any kind of comment at all?We all agree that ALL children should be educated, but we also have to realize that this is not reality. Many children do not have advocates to speak for them. Some of these children grow up to be very productive citizens that are very self-reliant. That is not a bad thing. I think that in America today - we have SO MUCH - that we have begun to believe that every system REQUIRES a safety net. Now, we have 'safety-nets' for everything from health care to education. FAILURE IS A GOOD THING. Failure teaches us all what NOT to do. This idea that we can't have failure in America anymore is driving the idea of socialism - the idea that we'll all be better off if we'll just circle the wagons and form a collective only works with zebras, not human individuals who are all very different and who all have very different needs.We must begin to realize that failure IS an option - and not a bad one at that - and let the great American EXPERIMENT work as was planned in 1776.

Elena:  Life is not fair and things happen that seem wrong; but do you really think the Chinese system provides a higher quality of life than allowing children to learn, think and take advantage of the freedoms in the US? I know many people that had nothing, that now have everything. Struggle makes you stronger, makes you appreciate what you have and get. Thinking that the government is the solution is why the rest of the world has known so much misery.

Gina:  This reminds me of the MSNBC promo/commercial I saw where they say.... we must stop thinking about our children like they are our own and begin to think of them as the communities responsibility. This is where we are headed and if you don't accept this mind set you are labeled heartless or uncaring.

Jenni:  Exactly Gina! I think people truly want to help children, but we've lost our way. We don't remember how to do that without the government doing it for us and we don't understand now that to have government doing it for us takes away our autonomy and when we have no autonomy, we can't help ourselves and if we can't help ourselves we're helpless and if we're helpless we'll fail. Make sense?

Niky:  We have a lot of failure in this country.


Jenni:  Yes, I agree, but not failure because of lack of opportunity, failure due to federal and other micromanagement in the system which has bent the whole thing in the direction of collectivism. Look at ACT scores. When did they begin to plummet? During the late '60's and early '70's AFTER LBJ's federal interventionist program into schools called the Elementary and Secondary Education Act. Until that time, schools - for the most part - thrived. Heck, we put men on that moon! Have you studied the early colonists? They weren't able to survive as a collective. The only way for them to thrive was utilizing individual skills and effort. Both of these instances are well-documented and provide excellent examples of why collectivism cannot work. By its very nature, education MUST be as individual as humanly possible because each child has God-given skills and personalities. The only way to provide that is when government is as close to the people as possible, in the most local possible ways.If we are careful and wise, Americans will begin to learn from history that these experiments in educational collectivism will continue to fail. We can throw off the cloak of failure by allowing parents the PRIVILEGE of caring for their own children and not subsidizing failure by providing government-sponsored programming that continues the cycle of failure. Individuals (and churches) must be allowed to pick up the mantle and provide for those in need so the federal government can return to its sole enumerated powers. Further commitments to the failed collective system will produce nothing more than continued failure.

James:  We have the idea that poverty dooms kids, that ineffective and underfunded public schools doom kids, etc. ad infinitum. I grew up poor and was fifth in my class due to slacking off my senior year; my best friend was from a poorer, broken home and was valedictorian. I didn't have air conditioning or a television in my home until I was 14 in southern Georgia. Having little money, a broken home, or a thousand other excuses has ABSOLUTELY NOTHING to do with parent's ability to love, nurture, and encourage their children to succeed, nor with children's ability to receive that input and run with it. Schools have ONE purpose: when the students show up, teach them rigorously and effectively in the academic fundamentals. Teach each student to be accountable for only their own actions in their studies and send them home for the day.

Bottom line here:  If parents do not wake up and begin to regain their parental rights, the collectivists will win - and it won't matter if your kid is autistic, or super smart, or perfectly able but perfectly lazy - there will be no individualism left to allow these children to bloom into the precious INDIVIDUALS they will one day be.