What On Earth Could Be Wrong With Student Activism? 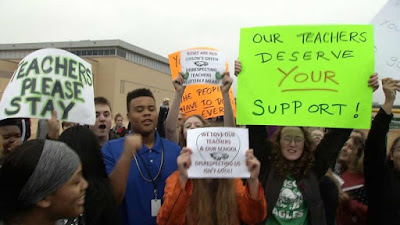 Though it definitely frustrated me to see teachers leave their classrooms and picket the legislature for more taxpayer funding of public education - shutting down some schools for as many as two full weeks - the level of activism displayed by high school students on this issue bothered me more.

Throughout the weeks, I read numerous private messages from parents frustrated by the amount of time teachers were devoting to discussing and promoting the teacher walkout in their classrooms. One message included a link to an organization called Generation Citizen which had a “location” in Oklahoma.

Here are a few of the missions of Generation Citizen: to lower the voting age to 16, and “to engage in advocacy and policy work, building demand for action civics”.
The woman who leads the Oklahoma 'location' of Generation Citizen had this to say of student-led advocacy during the teacher walkout.


“A week of direct civic action had turned protesters into savvy advocates.

Until this walkout, most of the participating students had never met their elected officials. But that’s quickly changing. Students have worked collaboratively to demystify the legislative process, understand the policy goals articulated by organizing groups, and advocate for revenue measures that would support a more equitable education system.”

So, what's wrong with that? Students were working "collaboratively" (note the educational buzzword) to support a "more equitable education system" - what could be wrong?

Okay, but what does that say about students who didn't support the walkout? Where was their representation? If there was none - which is how it appears - how is that an 'equitable' advocacy experience - and beyond that, how is that a learning exercise for all students involved? If only one perspective is advocated, if only one position is deemed 'equitable', Generation Citizen is doing little more than indoctrinating participants in that perspective, not educating students about civics - the workings of government - which they claim to do.

Maybe we need to define civics? What exactly does that term mean? After all, many words don't seem to mean today what I knew them to be even two decades ago.

According to Merriam-Webster, civics is the study of the rights and duties of citizens and how government works. The Generation Citizen website not only continuously refers to our form of government as a Democracy, it describes the civic process as simple agitation for change.

These are enormous problems.

Firstly, America is NOT a Democracy, it is a Representative Republic. A Democracy is - as Ben Franklin once famously said - "2 wolves and a lamb deciding what to eat for lunch".

Why would Franklin use this metaphor to explain the term "Democracy" - a term Americans today so often define as the basis for our form of government? He wanted to convey the notion that Democracy is essentially "mob rule" - whatever the majority wants, the majority gets. Those in a Democratic society may vote in 'free' and 'open' elections, but the elections are not backed by laws which govern their equality or accountability, thus the majority puts its needs above that of ALL citizens, often leading to a single tyrannical ruler or laws that favor some over others.

America is NOT a Democracy, it is a Representative Republic - a government where citizens select fellow citizens to represent them in a general government where laws are created (ideally) to protect the individual freedoms of every American as promised by the Constitution of the United States. Again, the responsibility of government in a Representative Republic, is to protect existing human rights, not create laws for a collective in which the majority has the rights. This is a very large distinction - one that separates human rights from rule of tyranny.

In contrast to a Democracy, America's Representative Republic exists of three branches that are to provide checks and balances of one another in order to keep one branch from subverting the others. The Judicial branch - made up of the court system - allows citizens to redress their government and provide accountability for laws that may be unjust. The Legislative branch - consisting of elected legislators - writes laws to protect individual freedoms and the Executive branch - consisting of the elective head of the government - the President - executes the laws passed by Congress, among other duties.

Civics is the study of the history of the founding of America, the writing of its Constitution, and the ways in the three branches function. This is essential knowledge for citizens to have before interacting with their government. Without an understanding of the notion that government exists to protect personal liberty and how it functions in this capacity, addressing government can not only be confusing, but incorrectly approached.

The Generation Citizen's curriculum uses the word "civics", though there is absolutely no study of civics involved in the curriculum - it's simply 'youth led change' (political activism/agitation) following the group's identification of a community 'issue' in need of change.

Contrast this curriculum with the Civics Questions for the American Naturalization Test. THIS IS CIVICS - the study of our American Government and how it works. There is no possible way, using Generation Citizen's curriculum, to have enough knowledge of government and the nation to pass this test. How then can it call itself a 'civics' program?

Without an actual knowledge of the Constitution - the protector of individual rights - agitating for change becomes mob rule. It engages in activities that protect the mob and undercut personal liberty. Everyone who didn't agree with raising taxes to fund public education in this state understands this phenomenon. Anytime a perspective counter to the 'mob' was expressed on social media, the 'mob' denigrated it and shouted it down until their perspective was all that was left on the page.

Not only was I a teen once myself, I’ve mothered one to adulthood and am working on three more. Anyone who’s parented teens knows how important these years are in helping to establishing the autonomy they'll need to make their way successfully in the world. This autonomy needs to be managed, however, because while teens begin to feel highly empowered by their ability to drive and work outside the home, their worldview is still microscopically small. If parents acknowledge the necessity of guiding teens because their youth creates a lack of judgement, why wouldn't it be important for teens to be exposed to every aspect of an issue in order to come to a greater understanding of the problem rather than simply parroting one side.

At 16, you've barely begun working - and paying taxes - you're not supporting a family or a household, you've not learned a full complement of US or world history - including civics - and you've more than likely not experienced the death of a parent or another life-changing event. Though teenagers don't like to believe it, after 5 or 10 years of facing life's challenges, one's perspective can alter a great deal.

In fact, at this moment in their lives, the absolute worst thing any educator or program can do is hand young people designated perspectives or push group advocacy. Learning cannot possibly result when one side of any issue is championed by an authority figure in a classroom, because this can leave students with different opinions feeling ostracized among their peers, uncomfortable for their grades and nervous to tell parents about classroom deviations from familial norms.

Teachers have HUGE influence on students - even at the high school level. With this power comes great responsibility - a responsibility to give students a 360 degree view of the world through subjects such as science, history and art, so they can become well rounded enough to develop their own views and perspectives.