The Oklahoma Standards Writing Process Must Not Be Tabled Again 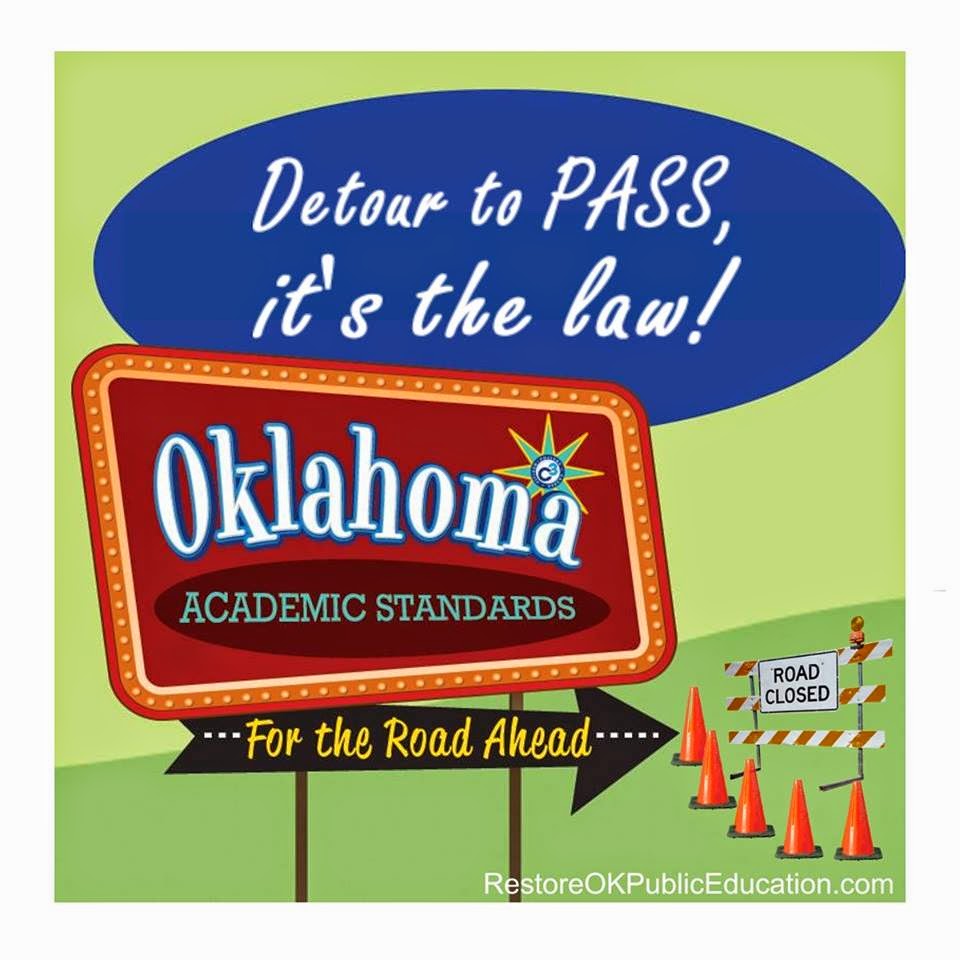 Yet another state school board meeting has passed and yet again the process for creating the state's new education standards has been tabled.

Honestly, I do not know what to think.  Yes, I can call up a number of contacts and get what could be considered a "run down" of the behind-the-scenes drama (if you will) - and I have - yet none of the background noise matters.  Oklahoma is still left wanting for the start of a meaningful process.

Let's re-cap the events since the passage of the bill:
Reminds me a bit of Sir Walter Scott from Marmion - "Oh, what a tangled web we weave..."

I'm not of the mind to rush into a process to create new Oklahoma educational standards, frankly.  I think the faster we go, the less thoughtful the process.  However, we can't continue to table the process indefinitely. Yes, I realize we will have a new superintendent come November, but he or she will not be installed until January.  Yes, I realize the process could be started and diverted into a new process with the incoming super, however, how long do you stall before you simply run out of time to do what HB3399 tasked in the first place - the creation of new EXCELLENT Oklahoma standards within two years' time?

To be frank, I'm not a fan of the proposed standards writing process.  I think when you get too many cooks in the kitchen your dish more than likely comes out unidentifiable and inedible.  I realize that - unlike the adoption of the Common Core - everyone wants this process to be unimpeachably transparent, but I don't think it takes over 500 people to make that happen.

I have had the pleasure of coming to know Dr. Sandra Stotsky, the premier knower of all things English in the United States - widely credited with having written the best set of educational standards in the country.  What if the Governor showed up to the party and suggested that Oklahoma bring in Stotsky and listen to her describe how she created standards of educational excellence?  What if the Governor suggested we move forward, while discussing different, possibly less cumbersome, methods of creating a standards writing/review plan?

Neither the Governor nor the Board want to be accused of stalling, or rushing, because neither situation will engender positive public sentiment, further frustrating the process.  Because of the leadership vacuum created by the loss of our current superintendent in the primary, strong leadership MUST emerge in order to keep this process moving until January 2015.  It seems perfectly reasonable then, to have the leader of our state chime in and publicly nudge the process forward.  With the people of Oklahoma waiting with bated breath for Common Core to rear its ugly head as it has in Indiana - and with the process already having been stymied three separate times since the passage of HB3399 - gubernatorial suggestion may not only decrease the unease of Oklahomans but increase her sagging poll numbers as well.  No matter what, and like it or not, the law stipulates we move forward, and that we must do in some sort of productive way beginning with the August 28th State Board meeting.  Yes, let's take our time and do this right, but let's at least move forward in a productive way, now.
Posted by ROPE at 7:01 PM