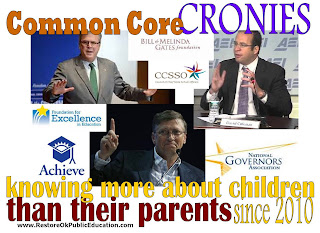 Janet Barresi, chair of the Oklahoma CareerTech board, announced in January Robert Sommers, chief executive officer and managing partner of Carpe Diem Learning Systems, had been hired as the state’s new CareerTech director.  In July (2013), Governor Mary Fallin announced that former Education Secretary Phyllis Hudecki's position would not only be filled, but modified.  After announcing that Robert Sommers would be filling Hudecki's shoes, Fallin also changed the name of the office from "Secretary of Education" to the "Secretary of Education and Workforce Development".

According to his biography, Mr. Sommers has worked in various levels of education policy in the state of Ohio, at one point serving as Ohio Gov. John Kasich’s education policy adviser for elementary through university levels.  During his tenure in Ohio, reforms for increased school performance transparency, teacher evaluation, school choice, digital education options and failing school transformation were implemented.

Oklahoma has gone down the same yellow brick road of 'education reform'.  Coincidence?  No, association.  All points lead back to Jeb Bush and his Foundation for Excellence in Education organization - a proponent of the large package of education reforms above, including Common Core.

Thanks to emails released through an FOI request earlier in the year by In the Public Interest,  a very inspired web of activity can be pieced together in which FEE writes legislation for states, often through an FEE-created program called Chiefs for Change, that push reforms which utilize software packages created by donors such as Pearson and makes room for such publicly funded, for profit charter schools such as Carpe Diem.  According to National Post;

Many of these donors sit on a Digital Learning Council that helped draft the Bush foundation’s policy agenda. Key planks call for states to require online course work in high school and to lift restrictions that hinder cyber-school growth, such as limits on class size.

In fact, Bush has flown educators from all across the country to Carpe Diem in Arizona to visit - including state superintendent Janet Barresi and former Indiana state superintendent Tony Bennett.  Today, Robert Sommers, CEO of Carpe Diem school, has become Oklahoma's new Secretary of Education and a new Carpe Diem campus opened in Fort Wayne Indiana before Bennett was relieved of duty as the state's superintendent.

In fact, Bush - through FEE - is so intimately involved in the process of instituting the education reform 'brand', Ogston said he and other charter and online school operators feel they can go to him to have the FEE write legislation or remove roadblocks that stand in the way of successful growth - which has happened in Ohio under Sommers.


"We come to them to say, 'These policies are in the way, and it would be great if you could change them,'" Ogston said. "That's what they do better than anyone."

In fact, as was written of Carpe Diem in Indiana,


Rather than seek a charter through Ball State or the Indianapolis Mayor's Office, Carpe Diem won its charter from the newly established Indiana Charter School Board, created as an easier path for charter expansion.

I see little way this can be viewed as any other than cronyism (Karen Francisco of the Journal Gazette in Ft. Wayne, Indiana appears to see this plainly as well) but this isn't the only troubling aspect of the Bush education reform constellation.

The Carpe Diem School in Yuma, recently had their test scores flagged.


"In spring 2010, the company that administers the AIMS test, Pearson Education, flagged Carpe Diem's sophomore AIMS reading test for having a higher-than-average number of erasure marks. Flagging means the state gets an alert. Pearson's report said a group of 27 Carpe Diem students who took the AIMS reading test had a total number of wrong-to-right erasure marks seven times as high as the state average. The state has no plans to step up monitoring during the spring tests."

The Christel House Academy - another charter in Indiana run by a large Republican party donor - also ran into similar trouble by way of former State Superintendent Tony Bennett.  In a furor that ended in his resignation from Chiefs For Change (his subsequent place of employment following his loss to Democrat Glenda Ritz), evidence was found that Bennett had used a loophole in the charter regulations to take the 9th and 10th grade scores out of the school's grading formula in order to bring their overall rating up to an 'A'.


Bennett has said that changing the grade made the rating system credible because he knew Christel House to be a high-performing school.

The linkages in the 'Jeb Bush inner circle' continue.  In 2011, Janet Barresi - Oklahoma's Chief for Change - was invited to an event hosted for Jeb Bush and Tony Bennett by Louis A. Piconi, founder and senior vice president of Apangea Learning, Inc.  (Apangea has a registered lobbyist with the state of Oklahoma)  According to a Tulsa World article:


In January 2012, Barresi’s department announced it would be spending $470,000 on a pilot program with Apangea Learning Inc. of Pittsburgh, Pa., to provide supplemental, online math instruction and tutoring services to 10,000 eighth- through 10th-grade Algebra I students attending the lowest- and next-to-lowest-performing schools across Oklahoma.

The Apangea program was expanded statewide for 2012-13 at a cost of $1.5 million and is now called “Think Through Math.” As of Jan. 31, 267 school districts, 584 schools and 64,667 students were participating from across Oklahoma.

A teacher who has requested anonymity told me that at first, the state offered Think Through Math at no cost to her district - the teacher had only to provide a number for each student to use TTM.  After that first year, things changed.  In order to keep using TTM, teachers were to give out student test scores.  This troubled several teachers, so the district asked if they would be able to use TTM without student test scores.  They were told that in order for students to have a seat, test scores must be provided.  This teacher told me of her concern that TTM was offering seats only to "targeted individuals" (it was intimated that these 'targeted' students were those with higher test scores) and that so much of the 'motivation' for students using the program was 'competition' - pitting schools against other schools.


Apangea Learning's innovative motivation system inspires students to learn by building self-esteem and confidence.  By rewarding students for consistent effort and achievement, students are driven to use Apangea – even on nights and weekends.

Kids are 'rewarded' with points they can then redeem for iPods and gift cards.


global research and development organization committed to science and technology for the greater good. We are solving what matters most through innovation for our clients, the nation and the world.

Battelle For Kids was created by the Ohio Business Round Table and Battelle in 2001.  'Impact Partners' include the Bill and Melinda Gates Foundation and Carnegie Corporation and Pearson Assessment Training Institute.  It is a partner in providing states programming to assist in implementation of the Common Core.

Battelle For Kids was used in Ohio schools while Robert Sommers was in Governor Kasich's office.   This is concerning not only because, once again, it appears that vendors are running the 'education reform show', but because Battelle not only has the 'value added' and roster verification programs for sale, but programs that will "transform" rural schools as well as inventory student thoughts and feelings - surveys that cannot be seen by the public unless purchased for $195 dollars.

Interestingly, Jeff Wadsworth, President and CEO of Battelle, is also on the board of Achieve - the organization that has pushed out the Common Core State Standards to the National Governor's Association and the Council of Chief State School Officers.

Clearly, there is a revolving door of educrat 'cronies' that not only originate with the FEE and Jeb Bush Foundation, but that pick certain vendors to 'market' to states who push their education reform efforts.  This is not free-enterprise - this isn't even free thinking - it's just simply good old boy crony capitalism.
Posted by ROPE at 10:49 PM